And so before you could actually know it… we’d hit number 6! The sixth anniversary dawned upon us and this time I wanted to do something special for my beloved wife. I was scouting for a destination that offers a perfect combination of sun and sea along with a luxurious stay. Goa was the first place that cropped up into my mind, but one of my office colleagues suggested, "why don’t you celebrate your special day in Mumbai? ” I really liked his idea, because we had been to Goa several times and so I thought to give Mumbai, fondly called as the “City of Dreams” a shot. Without wasting too much time, I booked a stay in a Club Room at the ICONIC Taj Mahal Palace Hotel. BELIEVE ME! My anniversary was more unforgettable and mesmerizing that I could have ever imagined. 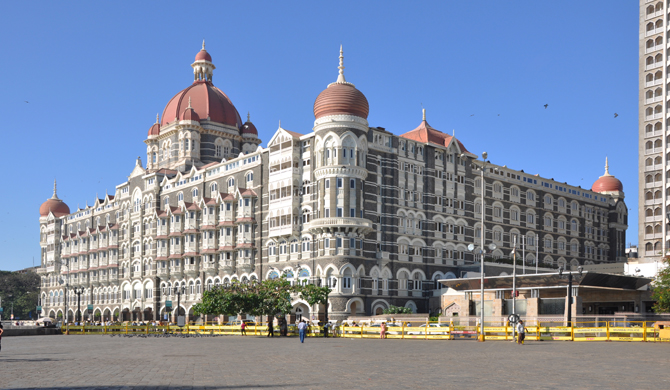 On the day of our anniversary, we checked in to a luxurious Club room at the Taj Mahal Palace Hotel. While booking the hotel, I had told the staff to make some special decoration in our room and to my utter disbelief, what they did for us was truly out of this world. It was like the room had been specially kept just for us! Heart-shaped balloons and rose flowers were amazingly decorated on the walls. There was a huge greeting card and a bouquet of colorful flowers kept on the bed. We were truly delighted when almost every staff member wished us a Happy Anniversary. The Executive Chef of the hotel sent a big chocolate cake to our room. The hotel really lived up to its reputation of treating its guests like a GOD.

Well talking about the room, it seemed that we were in the fairyland. The room was very elegant and swanky. The decor was the state of the art that immediately captivated our attention. The colors of the room were tastefully chosen and replete with every facility that one could dream of. Our room offered the stunning view of the majestic Gateway of India and overlooked the large pool filled with crystal-clear water. The large bath tub in the glass-walled bathroom meant that we could knock out fatigue while watching our favorite movies on the large screen TV. We had lunch at the Souk restaurant, on the rooftop of the Tower Wing, with beautiful views of the Mumbai harbor, the Art District and the Gateway of India. The entrance to the restaurant itself is grand and will astonish you with its magnificent architecture. The restaurant has an amazing ambiance and decor. One word which can describe the taste of the food is SUPERB. From the moment you enter the restaurant and the time you leave, you are actually treated like a VIP. I thoroughly enjoyed my meal as well as the ambiance and clicked some great pictures too. It is simply heavenly!

WOW!!! This was our reaction when we saw the Sea Lounge restaurant in the hotel. The restaurant has the best high tea in Mumbai, with an elaborate buffet spread of classic English delicacies and local Indian favorites. Surprise! Surprise! We saw the Bollywood Megastar Amitabh Bachchan enjoying a cup of tea at the same place. We were so delighted to see him and wasted no time to click some pictures with him. He made our day when he too wished us a Happy Anniversary. As we left the lounge, we were still in an awe of the superstar. And the next morning, after a cup of coffee, it was time to say goodbye to the hotel. We thanked the hotel staff for making our anniversary memorable.

Anniversary or no anniversary, I think, I would certainly like to stay at the Taj Mahal Hotel each time I travel to Mumbai!

Manish is an expert blogger at Trans India Holidays, he has been writing for the last half a decade. His passion for traveling made him a travelogue. Manish's dream is to explore every nook and corner of the country. When he is not on board, he pens down his experience through articles and blogs.